Traditionally, Quechua identity is locally oriented and inseparably linked in each case with the established economic system. It is based on agriculture in the lower altitude regions, and on pastoral farming in the higher regions of the Puna. The typical Andean community extends over several altitude ranges and thus includes the cultivation of a variety of arable crops and/or livestock. The land is usually owned by the local community (ayllu) and is either cultivated jointly or redistributed annually.
[...]
This disrupted traditional Quechua and Aymara culture based on communal ownership
[...]
Up to the present time Quechuas continue to be victims of political conflicts and ethnic persecution. In the Peruvian civil war of the 1980s between the government and Sendero Luminoso about three quarters of the estimated 70,000 death toll were Quechuas, whereas the war parties were without exception whites and mestizos 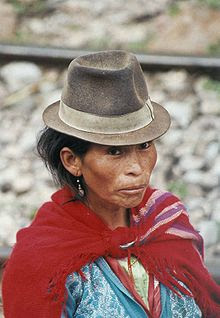