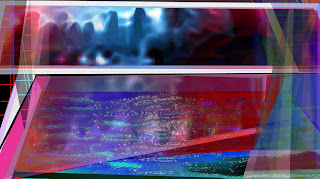 I have opened the portal to no one.  How, then, could a faint resonation of your sigh reach me here, in this exile where my last profiles are paged, fading faster than your memories. I heard it. I heard it in the language of petals and leaves shivering to suggestion and nuance.

Enveloped in a space that alludes to the hollow of a wooden horse-head, I kneel down, press the stripes of sunlight on my face against the fissures in the timber wall and all that is visible is sliced and projected on a distant flat canvass. Suddenly, in a city halved by war and quartered by famine, the feet of the stratagem that carries me are submerged in thick mud. Sinking. They, who ride on its back abandon their vane, inadmissible ambitions and flee. And so at last, I am aborted before coming to the end of a tortuous labour.

As if taken out of a box, I generate some aesthetic interest. I, the sample with statistical significance, a meatloaf on crutches (in lieu of a spine), sit there unaccompanied. They change my bandages and give me new name and national insurance number. The reasoning is that I've been driven through trauma to loss of identity. In effect, via links, juxtaposed lines of trenches – ink, water and scrap metal – to becoming an object looked upon with pity and revulsion. Some might be interested to know what I have witnessed, but my account would be unreliable.

Years after, and yes, after clocking in, clocking out (lost count of the times the cycles within cycles repeated themselves), from whose point of view shall this story be told? Seen in tandem, the shadows in the conflicting vistas cover the entire surface of the spherical map and his weekend is wiped out in pointless arguments. Moreover, the members of his syndicate are not willing to unbutton their coats. He feels like tearing their smiles up. Instead, he walks out, pays the fee and goes to the Strip Club.
After the show, the dancer came and spoke to him who generously listened, though the words to his ears, by then, were coins slotted in a parking meter primarily concerned with the ticking of the clock. Something about the temporariness of stay shaped that encounter. Before his paid time ran out, he said ‘see you’, and drove off. Later at night, one of the games he played as a host was to place a dagger on a velvet cushion, leave it on the table and see what happens. He stabbed the dancer on the back and stripped his body on the bloody bed before he laid it flat in the deep freeze of the night. When he woke up,

He finds me, the guest, the dancer, cast in steel and clay, rusted and cracked as if excavated from the depths of a dreamless sleep, still in my usual position: on the pedestal. The host strokes me as if I were a statue. His grip on my erect penis is that of the baby, clinging onto the milk bottle that replaced his culled mother.

And the rest of the cows, the healthy ones, stand in line to ensure that the rivers of milk go on flowing.
Yet, in new battle stations there is no butter. Only guns.