On the rightness or wrongness of peace 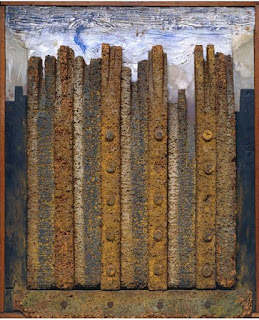 On the rightness or wrongness of peace, only philosophers can have the comfort to ponder - it's an irrelevance. The paradox is that a war is declared usually by those who will never experience the type of problems that give one an awfully bad breath, against those who have consequently lost their sense of smell. And there they go: they execute, by means of words or saw-blades and axes, disfigurements on the mouths that open to deliver with rotten teeth the reminders that all empires fall.


Speak now. You wanted to start on an official visit just after the contractors cleared the mess. Over the wall, eyes lain on the ground like countless pebbles on a seafront without sea, expand to two dimensions as far as an eye can see. You gulp down the view through the binoculars, encompassing the nurtured to torture and tortured to nature – both parts of the indifference that became our second and ultimate nature – but neither the audience nor the performer can now be shocked.


The old philosopher is pushing his back against the brick wall…


No. No sky is visible in the frame.


I just happened to be standing here.


You want to come over into the window and see it for yourself?


What? Stand next to me?


I’m sick and tired of windows.


They are more deceptive than illusionist paintings imitating them.


I prefer representations of the visual haulage to nothingness.


Perhaps I don't need any pictures at all.


Reality now could be nothing but waking up to interrogators who want to question you about the theft of a wild goose.  You know that they know.  And opposing the scheme would get the club nowhere, certainly no personal use to me. Emerging from an intense time whose minute details are strictly private and confidential, I mulled over this possibility: the split was so radical that the disavowed part could never be spoken of. What have I been missing all this time?


Nobody hinted anything. (I would welcome even innuendo, which I normally hate because I seldom understand). So I grew, you understand, into their mannerist overcoats, their magneto-phonic language and their thinking hats. And when the rates of social exchange altered, against my better judgement I started accepting more strokes than I gave. I kept my job and became stoical about millions of replicas of a 'Friday’ that has no reason to 'thank god' for what 'it is'