Snowden (still in the snow...) 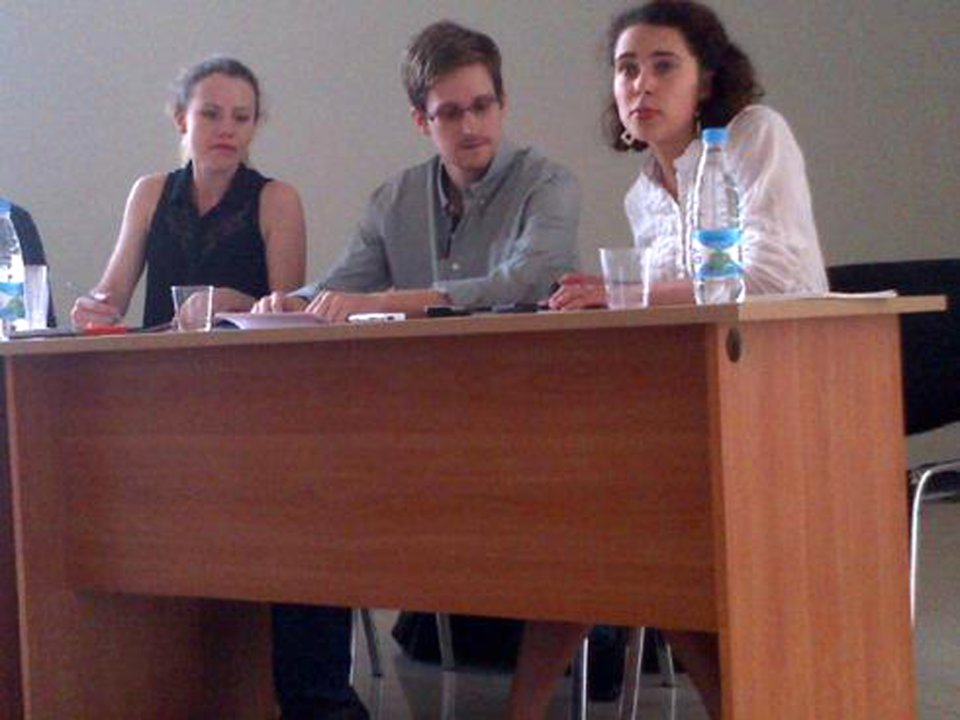 "A little over one month ago, I had family, a home in paradise, and I lived in great comfort".

Edward Joseph Snowden delivered a statement to human rights organizations and individuals at Sheremetyevo airport at 5pm Moscow time today, Friday 12th July. The meeting lasted 45 minutes. The human rights organizations included Amnesty International and Human Rights Watch and were given the opportunity afterwards to ask Mr Snowden questions. The Human Rights Watch representative used this opportunity to tell Mr Snowden that on her way to the airport she had received a call from the US Ambassador to Russia, who asked her to relay to Mr Snowden that the US Government does not categorise Mr Snowden as a whistleblower and that he has broken United States law. This further proves the United States Government’s persecution of Mr Snowden and therefore that his right to seek and accept asylum should be upheld. Seated to the left of Mr. Snowden was Sarah Harrison, a legal advisor in this matter from WikiLeaks and to Mr. Snowden’s right, a translator.
Transcript of Edward Joseph Snowden statement, given at 5pm Moscow time on Friday 12th July 2013. (Transcript corrected to delivery)


Hello. My name is Ed Snowden. A little over one month ago, I had family, a home in paradise, and I lived in great comfort. I also had the capability without any warrant to search for, seize, and read your communications. Anyone’s communications at any time. That is the power to change people’s fates.
It is also a serious violation of the law. The 4th and 5th Amendments to the Constitution of my country, Article 12 of the Universal Declaration of Human Rights, and numerous statutes and treaties forbid such systems of massive, pervasive surveillance. While the US Constitution marks these programs as illegal, my government argues that secret court rulings, which the world is not permitted to see, somehow legitimize an illegal affair. These rulings simply corrupt the most basic notion of justice – that it must be seen to be done. The immoral cannot be made moral through the use of secret law.
I believe in the principle declared at Nuremberg in 1945: "Individuals have international duties which transcend the national obligations of obedience. Therefore individual citizens have the duty to violate domestic laws to prevent crimes against peace and humanity from occurring."
Accordingly, I did what I believed right and began a campaign to correct this wrongdoing. I did not seek to enrich myself. I did not seek to sell US secrets. I did not partner with any foreign government to guarantee my safety. Instead, I took what I knew to the public, so what affects all of us can be discussed by all of us in the light of day, and I asked the world for justice.
That moral decision to tell the public about spying that affects all of us has been costly, but it was the right thing to do and I have no regrets.
Since that time, the government and intelligence services of the United States of America have attempted to make an example of me, a warning to all others who might speak out as I have. I have been made stateless and hounded for my act of political expression. The United States Government has placed me on no-fly lists. It demanded Hong Kong return me outside of the framework of its laws, in direct violation of the principle of non-refoulement – the Law of Nations. It has threatened with sanctions countries who would stand up for my human rights and the UN asylum system. It has even taken the unprecedented step of ordering military allies to ground a Latin American president’s plane in search for a political refugee. These dangerous escalations represent a threat not just to the dignity of Latin America, but to the basic rights shared by every person, every nation, to live free from persecution, and to seek and enjoy asylum.
Yet even in the face of this historically disproportionate aggression, countries around the world have offered support and asylum. These nations, including Russia, Venezuela, Bolivia, Nicaragua, and Ecuador have my gratitude and respect for being the first to stand against human rights violations carried out by the powerful rather than the powerless. By refusing to compromise their principles in the face of intimidation, they have earned the respect of the world. It is my intention to travel to each of these countries to extend my personal thanks to their people and leaders.
I announce today my formal acceptance of all offers of support or asylum I have been extended and all others that may be offered in the future. With, for example, the grant of asylum provided by Venezuela’s President Maduro, my asylee status is now formal, and no state has a basis by which to limit or interfere with my right to enjoy that asylum. As we have seen, however, some governments in Western European and North American states have demonstrated a willingness to act outside the law, and this behavior persists today. This unlawful threat makes it impossible for me to travel to Latin America and enjoy the asylum granted there in accordance with our shared rights.
This willingness by powerful states to act extra-legally represents a threat to all of us, and must not be allowed to succeed. Accordingly, I ask for your assistance in requesting guarantees of safe passage from the relevant nations in securing my travel to Latin America, as well as requesting asylum in Russia until such time as these states accede to law and my legal travel is permitted. I will be submitting my request to Russia today, and hope it will be accepted favorably.
If you have any questions, I will answer what I can.
Thank you.