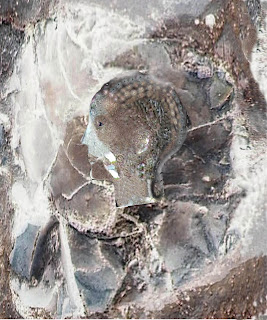 I am a in a hospital waiting room.  Opposite me stands a white man who strikes me as having an attitude problem. It’s not clear what he’s waiting for – whether he is a patient or a visitor. He is agitated and angry. He talks to a black man who appears to be his advocate – either a private doctor or a lawyer. The advocate (let me call him that) seems diffident, as though he feels awkward about his presence there. He is not as smartly dressed as the white man who is about to leave the hospital and, I believe, is complaining about having had to wait. I can hear him say ‘I’ve got a business to run’, as he’s walking out.

What strikes me is that he does say goodbye to his advocate who offers a handshake which is ignored. The advocate looks embarrassed, left there as if marooned in an awkward position. He makes for the exit and as he passes next to me he looks at me and murmurs something disapprovingly about his client, that ‘he is not taking responsibility for his own attitude and actions and blames others’ – or words to that effect.


Sometime later, I recognise the advocate. He is walking slowly, but with certainty, and heading towards me. The setting is completely different now, but I’m sure we are still in the same plot. I am sitting leisurely in the shade of a pergola in a park café. It’s the 28th of July, sunny and hot. Accompanying me are two friends:


Richard, who (unfortunately for me) happens to be a psychodynamic therapist (he is the one who challenged me to think that fighting for ideals is a sublimation of some kind of neurosis and to look after number one is healthy. I think I’ve already spoken to you about that…)
and John, who is an old friend, colleague and (at times) rival – in the same university department.


We are trying to solve a riddle, I think, but we’re just killing time pleasantly, really. The advocate comes to us, looking dishevelled and dirty, and greets me (‘hello! D’ you remember me?’ – that sort of thing). I’m standing up, out of politeness, to talk to him, soon to regret it, because he seems to want to have a conversation. But he isn’t going to have it – I hardly know the guy… He talks to me as I if I were his school mate. I keep studiously quiet. He says something about the incident in that hospital (the utterly insignificant point at which my history crosses his). The only thing that was involuntarily committed to my memory from that strange encounter was that he said 'people complain about irresponsible and crooked politicians, and about the system, but there can be no such a species as "the crooked politician", or a bad system, unless there are irresponsible and crooked citizens'. I begin to yawn and he decides eventually to say 'well, nice to see you again' and, as he is leaving, he briefly shakes my hand. It was only at that moment that I realised there was something seriously wrong with his hand: three of his fingers were missing, with only the little finger and the thumb remaining. Long and thick fingernails curved to form hooks, which he used to pinch things, I suspected, just like a crab. These were hands that looked dirty and menacing.

‘What was that all about?’ shouts John and I explain that I just performed a politeness ritual with the leader of a gang of beggars. He works  in the streets of London…

‘Yeah? Just like in the Oliver Twist story’, Richard interrupts, and I take no notice of the sarcasm…

‘Exactly. But the money goes to a terrorist sect whose aim is to abolish private property’. They know I make these things up ti see their response, of course. I add that rats ate most of his hand but spared the thumb and his little finger (I forgot what explanation I gave about that)...

‘I think you are losing it, mate’ says John. I ignore the remark and turn round to ask Richard: ‘There is a name for the little finger in your trade. What is it?’

‘Catalytis’ he says, and although I’ve never heard the word before, I recognise its etymology and figure that it shares the same root as the words catalyst, to catalyse, etc. But I respond by saying:

‘Oh yeah! Same etymology as the Greek word “cataliksis”’,  which has nothing to do with it… just to tease Richard, who doesn’t know the first thing about etymology. Concerning the origin of 'catalytis', I relate my theory to them – that it has been plausibly given this name because it is used to masturbate – 'self or significant other' – and catalyse orgasm. It is also the last and smallest of the fingers, forming cataliksis – the end of a process, “the little death” so to speak...
Richard says that  I “don’t miss the chance to show off my irrelevant erudition”, and jokingly I complain about the Greek language. Both my companions, of course, know I am Greek and find my remarks funny.

‘Fucking Greeks…’ I say, ‘They’ve given us a huge bag of words and we don’t even know the meaning of half of them’

‘Neither do the Greeks’ says John, and the three of us have a hearty laugh.

While the laughter goes on (maybe the cannabis has helped its prolongation), I envision a large white spherical bag, like a sun, half risen, emerging from the hilltop behind the park. In front of it, in a green field, black silhouettes of policemen are arresting the advocate.

‘Over there… where that white balloon is rising’ I point emphatically.

‘Where, for fuck’s sake? I can’t see anything’, says John.
Richard then diagnoses that 'we’ve got a problem here’ and John decides that it is 'too much fucking dope…’

‘Look man', I insist.'the advocate is being arrested’.

‘I think you are dreaming… and, anyway, who’s the fuck is “the advocate”’ says Richard.

‘Just now’ I scream angrily, ‘I just spoke to this strange guy, for goodness sake, why are you pretending you didn’t notice…  . His hand was like a crab claw...’

‘Forget it, Nick. No one gives a shit about your advocate’ John sounded unusually firm.


After about two silent minutes that felt like an eternity, one of them pronounced the redemptory ‘Shall we go…?’