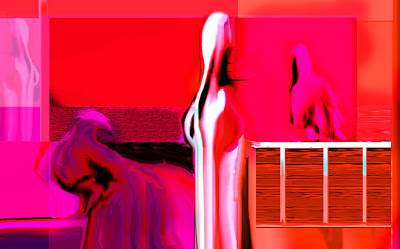 Baudrillard suggests that the real, which is not merely concealed but submerged into an endless, chaotic cloud of information-overloads and simulacra, thereby forming a dense,  impenetrable appearance, is lost. Leaning on Nietzsche, he concludes that the quest for truth is illusory which means that the only “reality” left is illusion.

This, however, is a contradiction in terms: to use the word illusion presupposes that you can recognise, if not define, “illusion” and therefore you recognise that it masks a reality, that behind or beyond it there is, or there was something else. To claim that there is no reality and that it has been dissolved in illusion means that you have a gaze separating you from what you see – you are engaged with, not engulfed in the illusion. To even begin to think, long before you speak of illusion, means that illusion has not taken possession of your gaze. Therefore your quest for truth is not illusionary; for as long as you can conceptualise illusion, your quest for truth may be the only real process in the labyrinth crowded by simulacra. Otherwise we are not talking about illusion, the vale before the real, but about hallucination, the solipsistic incapacity to see reality, which has no relevance to illusion, to reality, to falsity or truth.

The only tenable understanding of his thesis is to consider it a metaphorical expression, thus allowing for reality to exist in the space between simulacra. Within the total dissolution of the dichotomy between the real and the illusionary, the difference between the literal and metaphorical melts down – it is madness. As such, it cannot be a synthesis of the two but merely the destruction of their binary relationship.