The real trouble with war 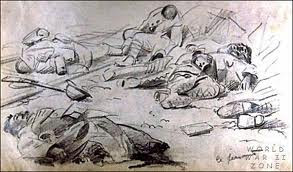 'The real trouble with war (modern war) is that it gives no one a chance to kill the right people.''

Who did Ezra Pound (the fascist) want to kill?


I don't exactly know, though I do have an idea...


But, at any rate, he was right - if he meant that the wrong people are killed in (ancient or modern) war,


Never those who start it.

For those who start it, are the ones who profit from it